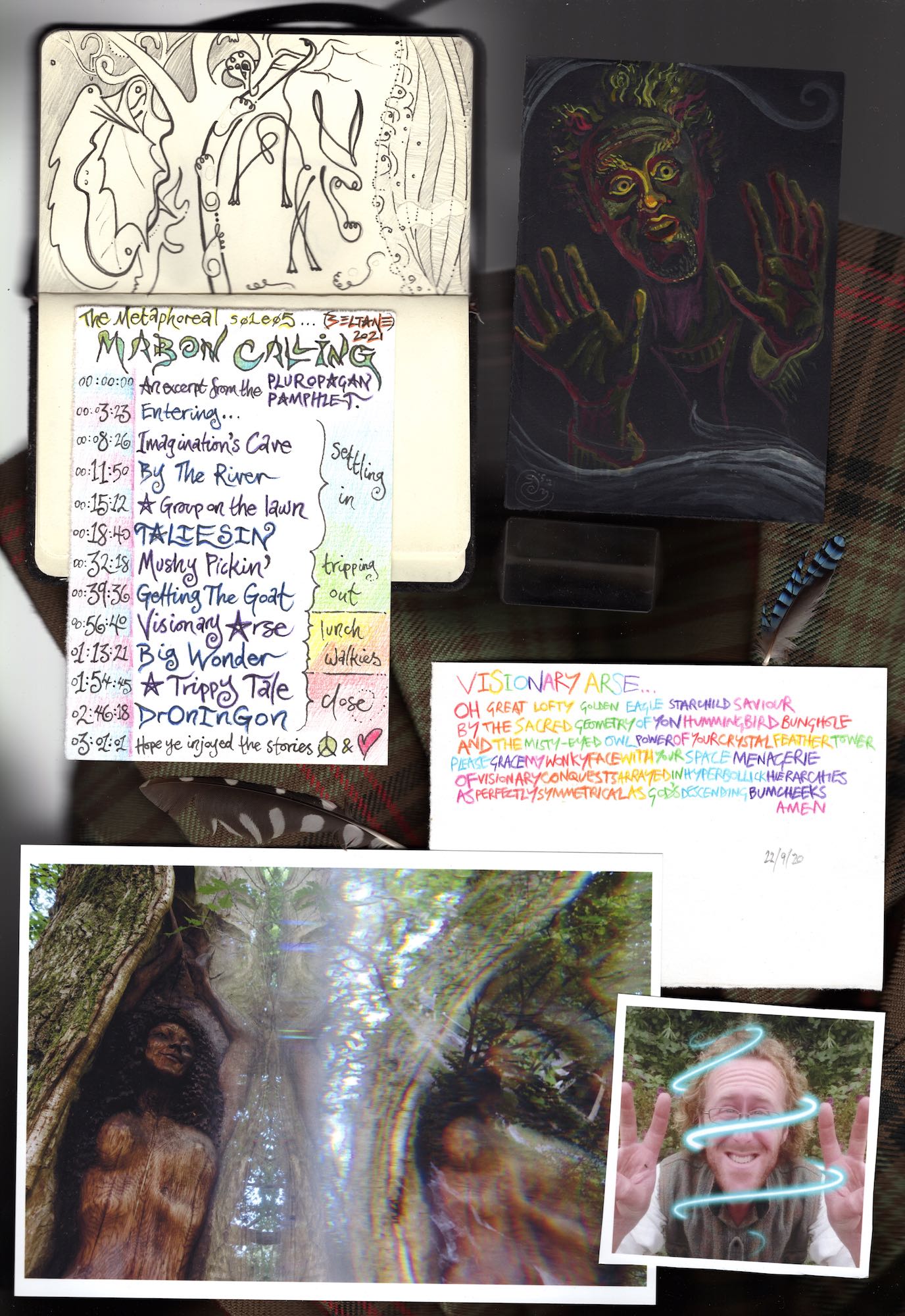 Tune in for episode 5 of The Metaphoreal, a storytelling special!

The show consists of a number of scenes selected from the middle of a novella I was working on a couple of years back, in which a bunch of strange folk (scientists, hippies, and arty adventurers) gather at a retreat centre on the fringes of Treesigh to explore altered states of reality and ancient mythologies. It is set in the 23rd Century in a world I am still discovering, in which E O Wilson's Half Earth idea, and James Lovelock's pragmatic assessments combine to inspire something of a utopia in which 90% of human activity draws back into highly advanced self-sufficient cities. The cities are called Asylums, and they are such in at least the two main senses of the word. The structure of this alternate British Isles is basically that it has the one great Asylum, around where Bristol is now, which is like a great glass dome (producing all its food hydroponically) and around that a thin band known as Urburbia, where the richer folk live, eating oldfangled organic stuff produced by the hippies who live out in Treesigh. Treesigh borders a great wall of some description, beyond which are Thee Wylds.

Here is some context taken from the thread dedicated to the show over at the ELF (electrolounge forums, part of the scriptor press/spiritplants radio ecosystem).

"Hi fronds, episode 5 is on this weekend - it is 3 hours long because i needed that amount of time to do justice to what might otherwise be an abandoned project... this show is basically a bunch of scenes selected from the middle of a novella i was working on a couple of years back (wrote about 80,000 words i think). i might return to it actually, because i quite enjoyed working on the show and saw some value in it (i think i had one of those, "oh no, it's all broke" moments before - when in fact it was merely flawed, which is fine and of course somewhat inevitable, and even useful in other ways).

anyway, i was basically dealing with or trying to process some difficult material - but the core of the book was an amalgamation of a couple of weekends at a neato hippy retreat in wales (looks just like a real life shire from the hobbit, in a way!) - and this all got refracted thru my projecting it a couple of hundred years into the future, perhaps to give me some distance, and also as part of dealing with some of the difficulty, concerning legacy in both physical and spiritual modes, basically.

there is a bit too much going on in a way, that i have more of a handle on now - like at least 2 story arcs - one concerning my waking as a poet, being inspired by the old myths that were being told around the fire at night, as well as the way they were told (seeing a proper storyteller in action was massively important in waking my own ability to perform my poetry a bit more, or to begin to give it the level of expression i desire to, performatively). and the other concerning my own processing around probably not having a family of my own in the more traditional sense, and this coming to a head in fact thru some of those same myths, which also deal a lot with a divine child, who might be inspiration metaphorically, and shouldn't be taken too literally, but when you have a bunch of psychic energy around such issues mythology comes alive in ways most modern people aren't used to - and in deed it is not easy to handle, and there aren't many teachers of it, tho in a way sometimes it seems like we all are... anyways.

that's some of the context - but for this show i just tried to strip it down to a core of experiences or scenes that would work well enough together, and i focused more on the 'speaking up/out' story arc, although it was the less consciously developed one - if i return to the book i will make it more about that, with my own processing subsumed into the "uncle wayback" character (who is both me, a late uncle of mine, and a fiction. and a hope!)

hope you enjoy it if you tune in!"